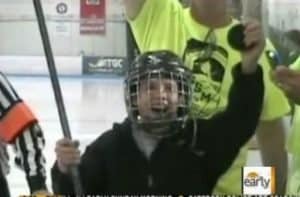 A week ago Nate Smith, I mean Nick Smith, no wait I mean Nate Smith made a once in a lifetime shot to win $50,000.  The story is that the Smith family attended a special event fundraiser for a local school.  Twin boys, Nate and Nick Smith were both in attendance.  The boys’ father purchased a few $10 raffle

tickets for a chance to shoot a hockey puck from center ice into a slot barely bigger than the actual puck.  The shot was nearly impossible.

When officials were drawing raffle tickets for the shot Nick’s name was called.  The only problem is that Nick had stepped outside the rink.  So his identical twin brother, Nate, was sent on the ice in his place.  Never really thinking he had a chance at making the shot he decided to shoot for his brother.  When Nate made the shot the crowd erupted with enthusiasm.  Caught up in the excitement the twins’ father, Pat, signed the paperwork saying that Nick had made the shot when in fact it was Nate.

Realizing the next day that he needed to teach his kids a lesson about telling the truth Pat called the event organizers and explained that it was really Nate who made the shot.  Now here’s the dilemma.  Should the insurance company pay-out the $50,000 prize anyway even though the rules clearly state that the person taking the shot has to be the person whose name was drawn in the raffle?  The insurance company has not made a ruling yet but the boys are hoping that they get the prize money saying they will save for their college and also donate to their local hockey association.

What do you think?  Should the insurance company pay the prize anyway?

Be sure to check out our article on How and When to Use Promotion Insurance for Experiential Marketing.