We set out to find the top five most impactful marketing vehicles of all time. The whole discussion started with how we describe what we do for a living. In the business of Experiential Marketing, formerly known as Mobile Marketing, the branded marketing vehicle is the bling-on-the-scene, the wow factor, the buzz generator, drawing people like moths to a flame at events and stores. The car, truck or double-expandable trailer wrapped in a branded blanket of color and tag lines is one of the starting points we use to describe what we do. Everyone has seen them, everyone has walked up to them, slightly wide-eyed in wonder – but which ones are the best? Which ones stand alone as the most effective, memorable and seen vehicles ever? Here are the vehicles we’ve deemed the best of the best. 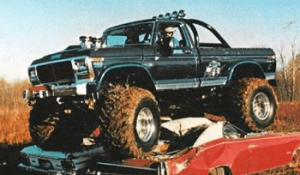 It all started in 1974 when Bob Chandler built the first BIGFOOT, right here in our own back yard, St. Louis, Missouri. It was built under a 1974 Ford F250 body with giant Firestone Floatation tires. In 1979 they added rear-wheel steering, which made parallel parking at the mall a breeze. In 1981 the famous words “Hey guys, watch THIS!” were uttered by Bob when he decided to see if he could drive BIGFOOT over a couple of old junk cars. Bob survived and a new “sport” was born. Monster trucks are kind of like the pro-wrestling of auto sports – branded, promoted and highly attended by millions every year.

#4. We have a tie for fourth place – The U.S. Navy Blue Angels, and the U. S. Air Force Thunderbirds 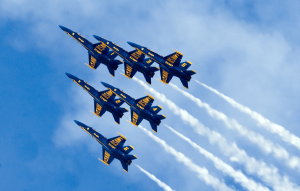 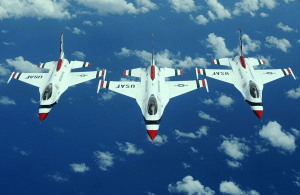 These teams, comprised of the most talented pilots on the planet have been inspiring young men and women to join the U.S. Military services for over 55 years. Collectively these teams are seen, live, by millions of people every year. Both teams train tirelessly, year round, and are the undisputed experts at precision aerobatic maneuvers. Both teams fly cutting edge fighter jets that represent the pinnacle of aerospace engineering and they represent the finest brand in the world – The United States of America. 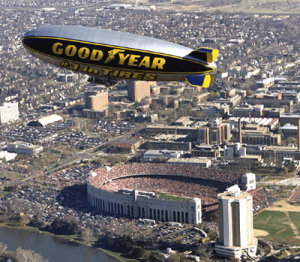 The first time I saw the Goodyear Blimp I was playing catch in my front yard. I heard the distinctive, slow-moving prop overhead, looked up and there was that massive silver and blue blimp floating right over my house. Goodyear has been flying their blimps for over 80 years and today there are three blimps in their fleet: the Spirit of Goodyear, the Spirit of America and the Spirit of Innovation. What All-Star Game, World Series, Super Bowl or NASCAR race would be complete without the Goodyear Blimp? If you’re one of the blimp pilots and ever in the St. Louis area, look me up, I’d love to take a spin over a Cardinals game with you. 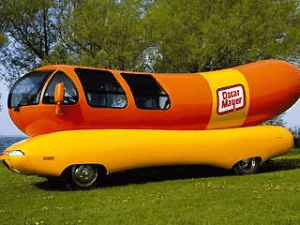 This is one of the most recognizable, unique and long-running branded custom vehicle on the road today. It started its journey on the blue highways in 1936 and is still turning heads wherever it goes. I wish I had been in the room when this idea was hatched. “Hey, I’ve got an idea, let’s build a giant hot dog on wheels and drive it around the country.” This branded all-beef wiener continues to log thousands of miles every year from coast to coast. Every household I’ve ever been in seems to have a couple of those little red Wienermobile whistles in the toy box – that’s what I call marketing. 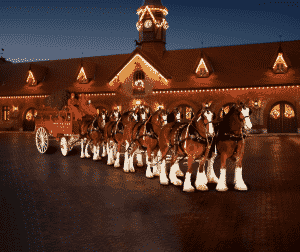 Our choice for number one is actually no surprise, we are after all based in St. Louis. There is no other vehicle, plane, wagon, boat or balloon that stirs the soul quite like the pounding hoofs and rolling red wagon that is the World Famous Anheuser-Busch Clydesdale Hitch. It’s been the undisputed champion of mobile marketing since it was introduced on April 17, 1933 when August Busch Jr. rolled out the first case of beer after Prohibition was repealed. Today the hitches travel over 100,000 miles each year in North America and occasionally crosses the ocean for international appearances. There are actually five active hitches around the country, each weighing in at around 12 tons! Each Clydesdale weighs in around 2,200 lbs, is eighteen hands tall at the shoulder (that’s six feet tall for us non-equestrian types), eats 20 to 25 quarts of grain, 50 to 60 pounds of hay and drinks thirty gallons of beer, I mean water, a day. What a magnificent icon and clear choice for The Top Marketing Vehicle of All Time. 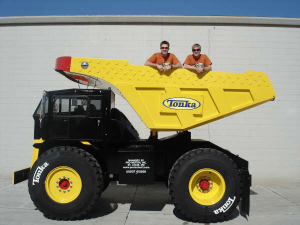 Okay, yes, we created it but that doesn’t change the fact that it’s still one of the coolest mobile vehicles ever.  This giant toy dump truck is identical in every respect to the real kid-sized Tonka Truck. It stands at an impressive 10.5 feet tall from the bottom of its 500 lb. tires to the top of its red handled bucket and it tips the scales at just over 6 tons! The kicker is that it’s highway legal and actually cruises at 60 mph – we prefer to chauffeur it from place to place in the comfort of its own flatbed trailer. It was built for our good friends at Hasbro for the 60th anniversary of the Tonka Truck. It has appeared on the Tonight Show with Jay Leno and on the Ellen Show while collecting toy donations for Toys For Tots with the U.S. Marines.

After 75 years the Clydesdales, Wienermobile and Goodyear Blimp are still in the field and air, still capturing the attention of media, crowds and now the internet. You have to believe that those companies really do get it when it comes to experiential and mobile-vehicle marketing. If you think we may have missed one, jump right in below and share your thoughts. We look forward to hearing from you.

Pro Motion is a St. Louis based experiential marketing firm with over 15 years in business, bringing some of the best brands in the world face-to-face with their best customers. We hire the most exceptional brand ambassadors in the field and thoroughly train them so they become true extensions of the brands they represent. A full 35% of our brand ambassadors have been hired, full-time, by our clients. And we have a 95% retention rate with our clients! That’s remarkable.