One Million Hours of Community Service Via Event Marketing 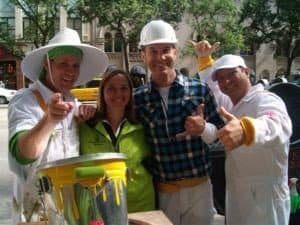 How cool is it that the biggest entertainment company in the industry, Disney, has a nationwide campaign to facilitate one million hours of community service in 2010? We are feeling the pinch of the economy and now more than ever we need to help each other. Giving back is what it is all about.

Disney Parks is working with a nationwide agency, Hands on Network, to provide one million hours of community service. If you donate your time through HON via www.disneyparks.com, you will get a free day at Disney–now that’s giving back!

Oh, and the fun part is that our street teams are traveling all across the country with this really cool group of street performers called the JAMMitors. They sing, rap, dance, and bang on garbage cans.  What?!!! That’s right, I said garbage cans and large plastic paint buckets and even garage can lids. The JAMMitors have people dancing all across the country, from the folks in Times Square in NYC to the Boston folks! The Texans are dancing in Houston and Dallas, and the Californians are dancing in San Diego and LA. That’s feel-good experiential marketing that gives back.