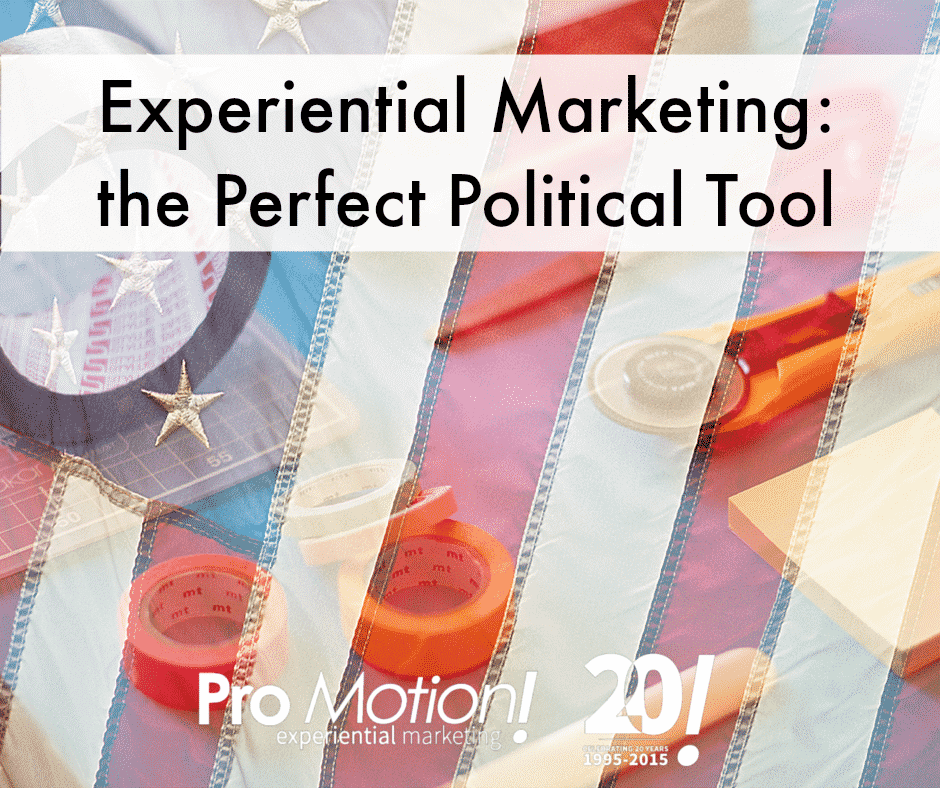 This article originally appeared in Business 2 Community. In it, Steve takes a look at experiential marketing as it applies to political campaigns. See the original article here:

With the election right around the corner, 2016’s presidential hopefuls have taken over our televisions with interviews, smear campaigns, and countless heated debates. An estimated $4.4 billion will be spent by candidates on TV advertising alone; this is seen as a necessary expenditure, as many of today’s voters eat, live, and breathe a media-driven culture.

But what about the campaigning that isn’t specifically made-for-TV? Candidates have also been fielding questions at community-driven town hall meetings, rubbing elbows with the public at fundraising dinners, kissing babies, and eating snacks at house parties.

These are all examples of experiential marketing: wooing an audience and earning brand loyalty through hands-on experiences. Come Election Day, the candidate who best embraced this strategy will be happy he or she did.

The Power of Political Experiences

Before the dawn of television, presidential campaigns depended upon experiential marketing. President Harry S. Truman took a 31,000-mile train ride across the country, delivering 352 speeches to more than 3 million citizens during his 1948 reelection campaign.

Maybe the idea of 3 million handshakes makes you want to douse your hands in sanitizer and get a flu shot, but these types of experiences build connections with the public that cannot be duplicated through millions spent on television ads and social media posts alone.

In-person interactions are opportunities for candidates to be more than robotic politicians wearing starchy suits and American flag pins; the events offer them chances to be authentic in front of voters, to optimize their brand presences, and to efficiently spread their messages.

Thanks to the power of the selfie, a candidate’s reach extends wherever eventgoers choose to share their photos. And further, attendees often receive brand swag such as hats, buttons, and signs that also spread the word in the most organic way possible.

It’s a win-win for all parties.

Experiential marketing is such a powerful tool, for both politicians and brands, for these three reasons:

1. It Promotes Emotional Connections. Emotions don’t just play a major role in our purchasing decisions; a recent American Psychological Association study found that political brains are also emotionally wired. Even the most well-educated, politically savvy voter can be influenced by an experience that tugs on his or her heartstrings.

Experiential marketing cuts through the media clutter and creates a much-needed personal touchpoint. There is no substitute for face-to-face interaction.

2. It Brings Brands to Life. Television is a powerful medium that enables politicians to control everything: from their camera angles to the questions that media lob at them. The same goes for companies who employ traditional television advertising; well-produced ads present polished messages and ensure that they’re shown in the best possible light. This doesn’t provide a true experience for consumers, though, and studies show that live events are actually much more effective at reaching and making an impression on audiences.

Letting consumers interact with a humanized version of a brand creates a deeper level of connection that’s based on reality — not scripts and special effects. Experiential marketing places actual human beings in front of the target audience and encourages a two-way dialogue.

3. It’s a Free Sample. Sometimes, traditional advertising or word-of-mouth will pique a consumer’s interest, but he or she will feel hesitant to buy the product without trying it out first. In a sense, experiential marketing is like one big free sample that can seal the deal for brands. A hands-on experience, even if it’s brief, can be more than enough to show wary consumers that a product or service is worth purchasing.

In-person campaign events are a perfect opportunity for voters to sample candidates — to experience the grip of their handshakes and have dialogues about real issues that are important to them and the country.

In such an impersonal, digitally driven culture, allowing consumers to experience your product (which is you, if you’re a candidate) in a real-life setting is just as important as it was back in the days of rail travel and Harry S. Truman. When you incorporate an authentic, humanized event into your marketing strategy, you dramatically improve your chances of building an army of loyal brand fanatics who are eager to spread the word about your greatness.
Read more at https://www.business2community.com/marketing/experiential-marketing-perfect-political-tool-01496579#6ysyP4vjvBPCVIwc.99