A Day in the Life of an Experiential Marketing Program 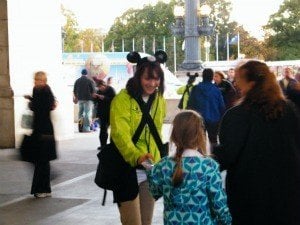 With all the moving parts we manage every day in the experiential world, the best laid plans of mice and man often go awry. And when one of the mice happens to be the most beloved, protected brand in the history of brands, it takes real dedication and resourcefulness to ensure the show goes on when everything around seems to be working against you. So when Disney Parks wants to spread magic to thousands of guests in cities coast-to-coast, they call on Pro Motion to “make it happen.”

It was a chilly but sunny day in the nation’s capital, and we were gearing up for the biggest event so far on the “Give a Day, Get a Disney Day” tour that afternoon and the JAMMitors and Disney Street Team would perform outside the White House—a permitting feat in itself. But the morning quickly turned frantic when my entire livelihood ended up on the shoulder of a D.C. serial thief, who stole my backpack containing two cameras, personal checks, a passport, all the day’s permits, and most tragically, the laptop that ran the entire training presentation for the local Disney Street Team.

After a few moments of self-pity, the instincts kicked in and we put a new plan in motion. In a divide-and-conquer fashion, the team split up to secure new permits, print out hard copies of the training presentation for the Street Team and file police reports, all in the remaining 30 minutes of prep time the schedule allowed. The show must go on. Clearly time was of the essence, but so was demeanor, as a group of bright-eyed Disney volunteers arrived ready to become the Washington, D.C. Street Team.

At the end of the day, Disney Parks delighted guests at the White House on Constitution Avenue and at Union Station. The Disney Street Team rocked the District, and the client saw the results of a dedicated, resourceful Pro Motion team that “made it happen,” despite what Murphy and his law had to say. I’ll likely never see those belongings again, but at least I’m left with a great story that illustrates how we’re wired just a little bit differently.

Here’s a link to the video recap of our week in Washington, D.C.: https://www.youtube.com/watch?v=LILiA_p0gSE&feature=youtube_gdata